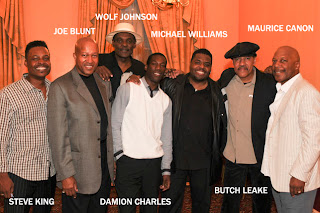 Recently The Drifters and The Drifter Legend got together for a prestigious
show at London's o2 Arena Celebrating 55Years that the Drifters organization
has been going....

It featured the current lineup of members under the Treadwell Organization
an featured former lineup members from days gone by......

Lifetime achievement awards were presented by Neil Martin of Sony Music
along with writer Roger Greenway to Butch Leake an Joe Blunt from the
70s lineup of the group...

It also marked the first recording from the group in over 30 years......

Absent from the Legends lineup was Bobby Hendricks of the Clyde Mcphatter
days who could not attend because of illness in the family.....

Photo: The Drifters and Legends in photo op back stage dressing room.......

(CORNER TALK REPORT)
Posted by Unknown at 4:27 PM No comments:

What a great leader we have here in these United States.....

What more can be said about a president who has the courage an the humbleness
to admit when he has made a mistake an except full responsibility for what ever
actions he has taken.

This is a far cry from the days of former president an politicians who for nothing
else remain in self denial about most of there action....

President Barack Obama has shown once again that he is a president for the
people an by the people over a resent statement made seemingly maligning the
Cambridge Police department in there arrest of Harvard Prof. Henry Louis Gates.

It's sad that critics who have nothing else to do but try an prolong an issue that
parties envolved are trying to get behind them....

Issues of race like the issue of guns in the United States will for ever raise it's
ugly head.

Yes things do get out of hand, so the nature of a country who's very existence
has been embroiled in these kinds of things since it's birth......

For to long in this country, race issues have just been tucked away in the
closet with know one standing up with the courage in tackling this scourge.

So what it being a local issue an the President of the United States weighing in
even though choosing his words in an uncalibrated way, still shows that we are
all part of this united family here an it will take all of us to sort out the worst of
of our problems.

For more details on the issue click on the title above........

(CORNER TALK REPORT)
Posted by Unknown at 1:36 PM No comments:

What ever happened to being innocent until proven guilty? If that was ever really
the case here in the United States..

With Rep. Peter Kings recent recent tirade against the late Michael Jackson, on
the day which was for the most part a sad an somber event for many people
on the planet.

We are reminded that the so called ideals of this country in many ways are just
a shame....

Politicians will go at any length to raise there political agendas.

The dead can't defend themselves, but you can be sure the living can....

The voice of the people will root you out Mr King and all of those who think
like you.....

What is it when we take some ones death to increase our own media coverage.

For all the good things this young man has done around the world are we to
forget it as if it never happened.....

If one was to say you are a bigot, would be unfair if there was know proof to
the so called allegation....

The same in the OJ Simpson case one was guilty before proven of any fact.
One has the right to his or her own opinion but theres a thing which we call being
tactful. Or some might say politically correct.....
Just remember you reap what you sow in this world of cause an effect. (NEVER FORGET THAT)
(CORNER TALK REPORT)
Posted by Unknown at 6:06 AM No comments: