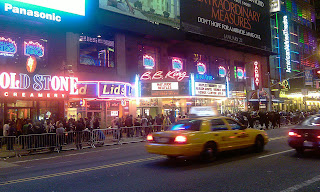 Violence as roving street gangs battle in the Times Square district of
the city Easter Sunday into Monday morning.

Police blocked Broadway and closed shops after 2 people were shot.

On 41street a man was reportedly shot in the ankle and 30 minutes
later a woman was shot on 51street...

A total of four people were reportedly injured from gunshot wounds
during the night........

(CORNER TALK REPORT)
Posted by Unknown at 4:18 AM No comments:

C.T.R. NEWS BRIEF....
Police in Italy have launched an investigation after body of woman was pulled from water near George Clooney's. home at Lake Comp.
Posted by Unknown at 7:54 AM No comments: