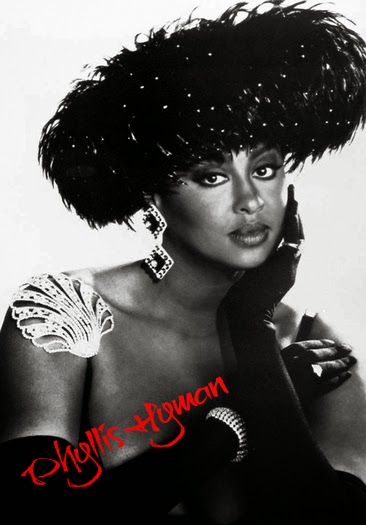 Phyllis Hyman a singers singer was one of the Legendary and most underrated singers of our times.
A woman of  powerful statue and voice and who commanded attention wherever she went and performed.
For most didn't understand this great woman of song who had a heart that was bigger than life and a sad end to it through suicide Phyllis Hyman was born in Philadelphia Pennsylvania, and grew up in the St.. Clair Village  the South Hills section of Pittsburgh. Born to an African American family, she was the eldest of seven children and a third cousin of actor Earl Hyman (best known for his recurring role on The Cosby Show as Cliff's father, Russell Huxtable). Hyman sang with Pharoah Sanders and the Fatback Band while working on her first solo album, Phyllis Hyman, released in 1977 on the Buddha Records label. When Arista Records bought Buddha, she was transferred to that label. Her first album for Arista, Somewhere in My Lifetime, was released in 1978; the title track was produced by then-label mate Barry Manilow. Her follow-up album, You Know How to Love Me, made the R&B Top 20 and also performed well on the club–dance charts. In the late 1970s, Hyman married her manager Larry Alexander (who is the brother of Jamaican pianist and melodic player Monty Alexander), but both the personal and professional associations ended in divorce.
For more on Miss Hyman Log into. http://www.ctrblogjournal.com/#!blogpoint/clj8

The Drifter Wars "The Generation Gap"

Drifters Legend member Butch Leake for "Corner Talk Report" This is a Vlog from his original CTR Blog covering the The Drifter War series written by The Artist. For transcripts you can log into http://www.ctrblogjournal.com or http://www.cornertalkreport.com Music "Way Of Life"

(Corner Talk Report)
Posted by Unknown at 2:39 PM No comments: